Virtual machine down-time is all in the past for South Devon College, thanks to their VMware virtualisation solution implemented by BCNS. 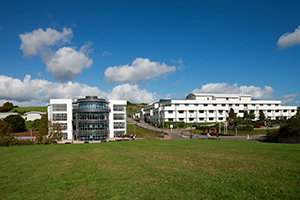 Staff, students and the IT team are all enjoying the efficiencies of ‘single sign-on’.

With 1,000 staff, 10,000 students and 5 campuses across Carmarthenshire, Coleg Sir Gâr is one the largest education providers in Wales. Its 15-strong IT team has a challenging task, not only to keep the College’s multiple IT systems running smoothly but also to ensure users can easily access the services they need.

The College runs a variety of systems:

The College was keen to ensure seamless user access across multiple applications; firstly to improve user efficiency, and also to prevent wasted IT time due to login problems, often caused by forgotten passwords.

Having worked with BCNS on a number of previous projects the College was happy for us to advise them on the best solution. As it happened, they were already aware of KeyShield SSO, so our recommendation was reassuring. They were given a demonstration of the system before going ahead with full implementation in spring 2013.

KeyShield SSO took about a month to deploy with three of the College’s development team working on KeyShield SSO in conjunction with the College’s portal system. Changing the authentication for live sites was the only challenge, but aside from some minor caching issues the implementation was smooth. The developers at KeyShield provided the College with support and training.

KeyShield SSO is now successfully integrated in key areas and is reaping benefits, being described as “fantastic” by the IT support team. All relevant links to web applications are now in one place, easy to access; and login problems have also reduced, making it a success with staff and students too.

If you are looking for a solution that will reduce your IT helpdesk calls and provide a single sign-on solution for the organisation, KeyShield SSO is the way to go. Users can go about their business in a more efficient manner without too much effort from IT support. Gone are the days of users having to remember multiple usernames and passwords. The implementation of KeyShield SSO as a single sign-on solution has been fantastic.”

South Devon College is a major education provider in the region, offering vocational, degree and development courses to over 14,000 students aged 14 to adult. With several sites across South Devon, the College depends on its IT team to maintain a smooth and efficient system for both staff and students.

The College had been running a Hyper V virtual environment, but was experiencing problems with live migration. Any down-time in such a busy network is a key issue for users, and this was the main reason the College sought to change its virtualisation system.

Implementation and support from BCNS

The College chose to work with BCNS because of our knowledgeable staff and years of experience in education IT – and being based locally in South Devon was also a benefit. BCNS was able to guide the College in how to structure its VMware solution, and supply the necessary hardware and licences, as well as undertaking the entire project management, implementation and training.

The initial implementation took a week. There were some existing networking issues to overcome shortly after, but BCNS was on hand to help, working with the College IT team late into the night to resolve the problems.

Two years on, the College is still very pleased with their VMware solution. “Creation of new servers is simple and quick, enabling us to test systems easily without great investment in time and money,” commented the College’s Mark Wilson.

BCNS has returned a couple of times since the implementation, for 2-3 days, to help the College further expand and improve its VM environment.

“South Devon College has been working with BCNS for two years on implementing its virtual environment. This has been a relatively simple and straightforward process due to the knowledgeable and helpful staff. I would recommend BCNS to anyone thinking of implementing virtualisation into their organisation.”